Following on from our shock story EXPOSING the attempt to CENSOR The BRISTOLIAN, here is the full (“NOT FOR PUBLICATION”) text of the letter sent to The BRISTOLIAN‘s web hosts by city centre legal eagles Burges Salmon on behalf of HorseWorld Trust’s bosses in their risible (and inaccurate) attempt at gagging a newspaper…

For the attention of XXXXX

URGENT – NOT FOR PUBLICATION

Notice of hosting Defamatory and abusive content at <http://thebristolian.net/>

We act for Horseworld Trust (“Horseworld”), a charity based in Staunton Lane, Whitchurch, Bristol BS14 0QL.

Horseworld is a small UK charity caring primarily for horses ponies and donkeys. It rescues, rehabilitates and rehouse animals that have been abandoned, neglected of ill-treated. Horseworld is funded entirely through public donations and relies on public support.

1. PURPOSE OF THIS LETTER

1.1    We understand from DNS records that you are the host of the website http://thebristolian.net/ known as “the Bristolian”. The Bristolian is publishing unlawful defamatory material about Horseworld at this URL.

1.2 The purpose of this letter is to inform you of the unlawful material on the Bristolian and request that you remove or disable access to the website immediately in order to avoid any legal action being taken against you.

1.3 It is regrettable that a relatively small charity is being forced to take action but the Bristolian appears to be intent on a vexatious, abusive and defamatory campaign against Horseworld, its management, trustees and finances.

1.4 Given the public support required for a charity to operate, the continuing operation of the Bristolian is causing serious harm to the charity and it has left Horseworld with little chance but to pursue legal action to protect its reputation.

2.1 The material on the Bristolian’s website concerning Horseworld is voluminous. Just some examples of the defamatory material are below:

(i) Abusive comments about Horseworld’s management and trustees, in particular the Managing Director, Mr Mark Owen. Amongst other comments, Mr Owen is called an “incompetent twat”, a “crap boss”, a “dunderhead” and compared to the “back end of a panto horse”.

(ii) Untrue allegations that Mr Owen has “forbidden [staff] from doing the very work they’re employed to do: rescuing animals in need”.

(iii) Untrue allegations that the charity is “being ridden into the ground”.

(iv) Untrue allegations that Mr Owen forced staff and “demanded” that they write to Bath and North East Somerset Council in support of Horseworld planning application.

(v) Untrue allegations that senior individuals at Horseworld have lied and “didn’t seem able to tell the truth” and that trustees have “vested interests”.

(vi) Abusive user-generated content that is in some cases linked to other feeds that publish further abusive and defamatory content.

2.2 The above is just a flavour of the content of the Bristolian and we refer you to the website for more details.

2.3 A public vexatious and defamatory website such as the Bristolian has a serious impact on a small charity that relies on public support. As well as the website itself, the untrue allegations are picked up by other media and supporters of the charity.

2.4 Serious harm is being done to Horseworld by the website’s unlawful content and continued operation.

3.1 The Bristolian is hosted by you and this letter gives you actual knowledge of the unlawful content that you are hosting.

3.2 Please therefore remove or disable access to the Bristolian immediately and remove its content from the public domain. Please confirm that this has been done by 5pm on Monday (17 February 2014).

3.3 If you fail to remove or disable access to the Bristolian by 5pm on Monday, then our client will hold you jointly liable as a publisher and Court proceedings are likely to follow.

3.4 This is a serious matter and we recommend that you seek independent legal advice.

3.5 In the meantime all rights are reserved.

We look forward to hearing from you by 5pm on Monday. 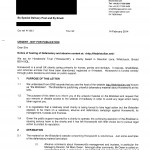 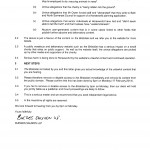 (i) Abusive comments about Horseworld’s management and trustees, in particular the Managing Director, Mr Mark Owen. Amongst other comments, Mr Owen is called an “incompetent twat”, a “crap boss”, a “dunderhead” and compared to the “back end of a panto horse”.

In our 20 November 2013 story HORSEWORLD PLANNING APPLICATION, TAKE TWO: A BIT OF A PANTOMIME? (OH NO IT’S NOT!) OH YES IT IS… we also said – in reference to the whole senior management team driving the development issue – “Apparently that will suddenly make them all financial geniuses and not the same dunderheads who created a massive black hole out of the generous donations and bequests from animal lovers keen to see abused donkeys, horses and other equine beasts rehomed.”

And yes, we did caption a photo of Mark Owen with the legend “management skills of the back end of a panto horse” – not once, but three times!

In context the first three are clearly fair comment – robustly articulated opinion, even. The fourth instance cited is based on Owen’s own adventures running for charity dressed as, umm, a pantomime horse, as publicised on HorseWorld’s own website and by the BBC!

However, we are happy to concede that we don’t know 100% his precise position within said costume. If it will make him happy, we will naturally make an appropriate correction, and amend the text to “management skills of the front end of a panto horse”.

(ii) Untrue allegations that Mr Owen has “forbidden [staff] from doing the very work they’re employed to do: rescuing animals in need”.

This simply isn’t an accurate quotation, despite the impression given by Burges Salmon in the letter.

We in fact said: “Meanwhile, while his new car’s engine purrs, HorseWorld staff complain they are forbidden by Owen – for financial reasons, of course – from doing the very work they’re employed to do: rescuing animals in need. That costs money, of course. Something that HorseWorld pleads it has none of” (CHARITY BOSS RIDES HORSE CHARITY INTO THE GROUND, 8 May, 2013). We have reported complaints by HorseWorld staff that financial constraints imposed under the management regime overseen by Mark Owen have prevented them from undertaking what they consider to be their primary work – animal welfare.

(iii) Untrue allegations that the charity is “being ridden into the ground”.

Again, an inaccurate quotation, which apparently refers to the TEN MONTH OLD HEADLINE referred to above! And clearly the very same financial situation that is leading Owen to threaten redundancies can be viewed as the charity being “ridden into the ground”. It’s certainly not a perfect clearance, is it?

(iv) Untrue allegations that Mr Owen forced staff and “demanded” that they write to Bath and North East Somerset Council in support of Horseworld planning application.

And yet again, an inaccurate quotation! (Did Lionel Hutz prepare this letter for Burges Salmon?)

What we actually said, in an article titled HORSEWORLD REVISITED: M.D. MARK OWEN & HIS MAGIC STAFF WRITE-ATHON (published on 21 October 2013), was that “ever the resourceful spiv, Owen hatched a cunning plan to win over the BANES Planning Development Committee, which meets this Wednesday (23 October) to consider his planning application… DEMANDING staff must write to the council with letters of support for his plan! No ifs, no buts, that letter had to be penned. Only they mustn’t say they’re connected to HorseWorld, lest they undermine their case.”

This story was based on information from reliable sources, whose word we had no reason to disbelieve given their accuracy on other matters. At no point since that article was published nearly four months has Mark Owen or anyone else at HorseWorld come to us with any concerns over its accuracy. In fact, our subsequent report, in which we analysed letters in favour of the HorseWorld management plan sent to BANES council, offers circumstantial evidence that staff did feel pressure from their bosses to publicly support the development proposals, perhaps even regardless of any personal doubts.

(v) Untrue allegations that senior individuals at Horseworld have lied and “didn’t seem able to tell the truth” and that trustees have “vested interests”.

Without specific (and preferably accurate!) quotations and accompanying URLs, it’s difficult to counter this – but suffice to say we dissected what looks to a reasonable person a lot like dissembling by Mark Owen in an interview about HorseWorld’s problems on BBC Radio Bristol (HORSEWORLD BOSS GOES A BIT ‘PINOCCHIOWEN’ LIVE ON RADIO!, 21 November 2013). Can that embarrassing episode be what they mean?

(vi) Abusive user-generated content that is in some cases linked to other feeds that publish further abusive and defamatory content.

This one is simply laughable. If anything we have made it clear, before it has even happened, that The BRISTOLIAN will not tolerate threatening comments – against anyone – being posted to the website. Neither Mark Owen nor the Burges Salmon legal interns badly C&Ping from our website can find any “Abusive user-generated content”, for the simple reason that it isn’t there.

Claiming it is would be what some in the legal profession would call a porkie-pie, right?

4 thoughts on “PANTO HORSE GATE: THAT LAUGHABLE LAWYER’S ATTEMPT AT A THREATENING LETTER IN FULL!”