Ever so informative Wikipedia says this under the heading ‘Treating (law)‘;

Treating is an electoral fraud criminal offence in the United Kingdom. Treating occurs when an election candidate or their agents offer material incentives for people to vote for them or to abstain from voting. It is a triable either way offence with the sentence being up to either an unlimited fine, one year imprisonment or both.[1]

News drifts in from Lockleaze that Theresa Allain, the new Regional Office imposed  Labour candidate for the ward, one of the most deprived in Bristol, lives in Bristol West!

Her upmarket period home in leafy BS6, just a stone’s throw from Redland Station has an estimated value of £1,402,000.

Who says champagne socialism is dead?

At the end of last week Labour Councillor for Avonmouth Jo “Hippy” Sergeant quit the Labour Party. Before running for the hills she fired off a letter revealing the Reverend and his council’s Labour Group as a misogynistic bullying hell.

Now, this week an entire ward committee has quit the party. Here’s what they say:

To members of Lockleaze Labour Party

We are writing to you to let you know that we, the committee of Lockleaze Labour Party, have taken the decision to resign. We feel that we have no other choice.

In October 2020, a meeting was to held to select two candidates to stand as councillors in elections to be held in May 2021 as both our longstanding councillors Gill Kirk and Estella Tincknell were retiring. The process was overseen and approved by the Bristol Labour Party Campaign Forum which was responsible for the selection of candidates.

There were six excellent local candidates. The two candidates selected by due process were Alfie Thomas and Anna Lart Greene (see attached photo). Both are in their twenties, committed to the local area and able to speak up for local people on Bristol City Council. However, our chosen candidates were blocked by the South West Labour Party Regional Director and no one from Regional Office has talked to us about reasons for doing so.

Instead, Regional Office took over the selection process. They have not met their timetable for the selection of candidates which means that we still do not have Labour Party candidates in place for May’s election, despite campaigning officially starting on March 15th. Therefore, our position as committee members is not tenable.

We regret the decision we have had to take but have been given no alternative.

Do Rees and his right wing regional office cronies think Bristolians will vote for any old crap put up by the disorganised bent shambles that now passes for our local Labour Party? 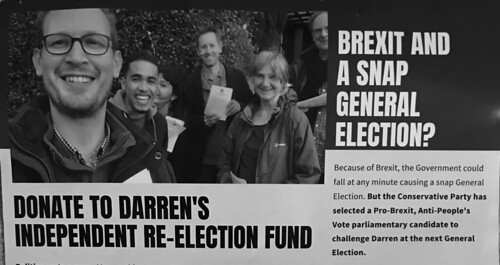 The people of Bristol are grateful for your support ladies … While Mayor Redpants continues to cost our cuts-stricken city a fortune with his endless European jaunts, one of his former Cabinet colleagues was selflessly saving us a few quid in travel expenses. Step forward recently deposed Lockleaze councillor and the low-key, low-impact Lib Dem ‘Housing Miniature’ GUY POULTNEY.

Before being toppled by Labour’s Estella Tincknell (from, err, Clifton) in the local elections at the start of May, Poultney – a keen reader of The BRISTOLIAN, according to our city centre distributors – had been invited to Brussels to make some sort of speech at a conference – something he gleefully agreed to.

However, when Shitty Hall officials carefully explained he couldn’t claim for his girlfriend’s costs on expenses, Poultney withdrew his acceptance sharpish and decided instead to stay at home EATING BOWLS OF SHREDDIES and watching reruns of Come Dine With Me in his pyjamas.

Who says our councillors use all-expenses paid trips as cheap holidays?