What are the council’s glorious leadership doing about the results of their staff survey published earlier this year? Remember the survey that revealed that a huge majority of staff at the council correctly viewed their bent and bonkers senior leaders as a bunch of UNTRUSTWORTHY CHARLATANS who were so out of touch they had no idea what their staff even did?

All was revealed to councillors last month when Billie Jean unveiled the kind of creative and innovative response he’s paid TOP-WHACK to deliver. He plans to … Wait for it … publish a “new structure chart with photos of senior leaders”!

Impressive or wot? Billie Jean’s really earning his six-figure sum with this NON-EVENT isn’t he? Quite how publishing photos of Head Boy Molton, who closely resembles a pig; Village Jensen who might be promoting ITV 4’s new “When Makeovers Go Wrong” and “Billie Jean” Jackson himself, channelling the style of a provincial accountant, will engender IMMEDIATE AND TOTAL TRUST from their staff is not a question Billie-Jean directly addresses.

Isn’t it time this useless shower of shit with no clue left Bristol alone and fucked off back to Devon or Leicester or wherever else it is they came from last year? 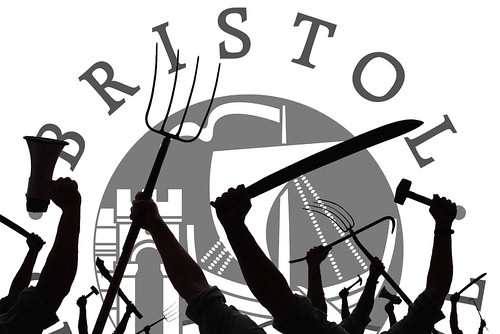 Another good kicking and a bloody nose for the vile shower of useless cowards who call themselves “senior leaders” at Bristol City Council.

A few months ago these Nazis decided to DECLARE WAR on the city’s homeless and cooked up a ruse, from the comfort of their 5-bed executive homes in the leafy suburbs, to target tent dwellers in parks for eviction.

The gang of lazy parasites then decided that the perfect people to harass and bully the vulnerable out of their homes on their behalf were the PARKS MAINTENANCE CREWS who you occasionally see cutting grass and generally maintaining our parks. A meeting between the lads and “senior leaders” was hastily assembled and the vicious plan explained.

“As you’re there on the ground, you can hand these tent dwellers a little note from the council telling them to leave,” trilled a glorious city council leader.

“I beg your pardon?”

“We won’t do that. It’s not our job. It’s not in our contracts. We’re not doing that. Do it yourselves.”

“You see what you’ve got to understand is we hate working for the council now.”

“You’ve scrapped our overtime which for some people made up half their wages. We can’t take vans home no more so we’ve had to buy vehicles. We only work here cos we’re waiting for our pensions.”

“And if we had the chance we’d like to burn the council house down with the mayor, the councillors and all the top bosses in it.”

Cue nervous eyebrow raising and gobsmacked expressions from the brave “senior leaders” followed by an extremely hasty and inelegant RUSH FOR THE DOOR. A few minutes later the middle management pansies of the parks department – who should never have let their bosses demand their crews do this dirty work for them in the first place – entered the room, broke up the meeting and sent the lads BACK TO WORK.

And, er, that’s it. Parks maintenance crews aren’t evicting tent dwellers from parks and senior bosses had to fuck off elsewhere at the council to find some mugs prepared to BULLY and HARASS the vulnerable and homeless for them.

We don’t like to say that we told you so, but … We told you so! That staggering pair of arseholes, Alison “Mullet” Mullis and Melanie “Joe” Henchy-McCarthy, Bristol City Council’s Chief Internal Auditors – who are supposed to protect our money at the council – have been EXPOSED as BENT and USELESS by the council’s ‘Bundred Report’ into its dodgy finance reporting.

According to independent investigator Steve “Sticky” Bundred, the pair of idiot auditors gave the basketcase ‘Single Change Programme’ – that was supposed to deliver £64 million worth of corporate savings to the council by March 2017 and didn’t  – a clean bill of health and a ‘GOOD‘ rating in July 2015. Although it was plainly apparent, even then, to anyone allowed to look that it wasn’t delivering the savings that it should.

While the two auditors researched their report in the summer of 2015, Sticky Bundred tells us that the man in charge of the savings, strategic director Max Wide “Boy”, had “developed SERIOUS DOUBTS about the achievability of the planned savings …   as [his] Directorate was clearly failing to deliver savings expected from investment in commercial property.”

Bundred also says, “These CONCERNS were apparently expressed by [Wide Boy] to the then City Director [Nicola “Lady Gaga” Yates] in a one to one meeting on 13 July 2015 and again in a presentation to an SLT (senior leadership team) awayday.”

So how did these two audit experts and super-sleuths employed by us to protect our money miss these OBVIOUS signs of a big problem in a programme they were investigating and manage to rate it as ‘GOOD‘ to councillors on the Audit Committee instead? Who knows? Because the Reverend Rees, so far, can’t be arsed to find out and neither can his Audit Committee.

Our intrepid auditors then went on to do a further investigation, specifically into the financial benefits of the ‘Single Change Programme’ in August 2015. Their draft report was issued to Wide Boy and his Single Change managers in November 2015. This draft report correctly identified cost reductions through a high-profile redundancy scheme in 2014 had NOT BEEN ACHIEVED.

Sticky Bundred explains, “Auditors believed posts were being deleted that had been vacant for a long time so there was NO ACTUAL SAVING and when actual people were released they were often replaced by interims/contractors or casual staff. In consequence, the draft [auditors] report identified RED RISKS in several areas.”

However, by November 2015, says Sticky, the Chief Internal Auditors had allowed the bosses in charge of the underachieving ‘Single Change Programme’ [Wide Boy, Arrogant and the Change Services Manager] to REWRITE their report for them!

The honest pair of auditors then proceeded to tell councillors on the Audit Committee in January 2016 via a ‘summary’ of their full report  that the Single Change Programme was operating at an ‘ACCEPTABLE‘ level without a ‘Red Risk’ in sight! When in fact it was FAILING to the tune of £29 million as all the bosses and both Chief Internal Auditors knew perfectly well.

This is straightforward LYING to our elected representatives. Why the fuck are this pair of bent audit bosses still in post and not at the Job Centre or, even, in a police cell?